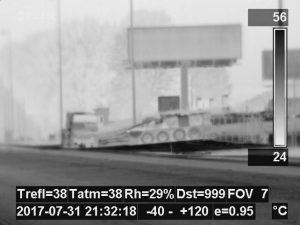 Application can be made on any surface, metallic or otherwise and most any building. It's a permanent countermeasure ready to be applied and integrated onto command centers, headquarters, bunkers, oil infrastructure, airstrips, and of course force multipliers- armored or tracked vehicles or weapon systems. “Apply and Forget, Coat and  Protect” Ghillie Suit and  Self Adhesive panels.